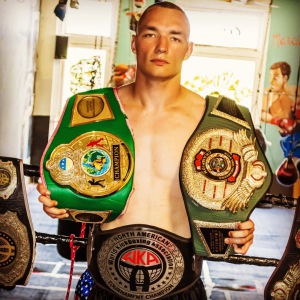 Jesse Swain is the Head Striking Coach, Head Instructor, Founder and Owner of American Muay Thai. As a competitive athlete himself, Jesse boasts a combined combat sports record of 29-2. He is a 2 time IFK World Champion and 4 time WKA North American Champion. Jesse holds a blue belt in Brazilian Jiu-Jitsu under Monroe Hall (Baltimore BJJ). He graduated from Towson University with a Bachelor Degree in Sports Management and currently serves in the United States Airforce National Guard as a Munitions Technician.

Born and raised on the east side of Baltimore City, Maryland, Jesse spent his early years living in a high crime area and was frequently a target of bullying. Encouraged by one of his teachers to take up wrestling as means of self-defense and
being bullied, Jesse joined the wrestling team at Eastern Technical High School as a freshman, and continued to wrestle for the school’s varsity team. After graduating from high school, Jesse enlisted in the Maryland National Guard.

Inspired by watching the famous UFC fight between Matt Hughes and Carlos Newton, Jesse enrolled in Combat Sports Center of Maryland to study Muay Thai. After his first class with Coach Greg Dorsey, Jesse was addicted and participated in any and all classes that were accessible to him. Coach Greg’s tutelage and guidance inspired Jesse to perfect his fighting skills; not only by learning to strike, but by learning other disciplines the Combat Sports Center offered including Brazilian Jiu-Jitsu.

Jesse signed up for his first amateur MMA fight after only two months of training. Leveraging his wrestling base, he took down his opponent two minutes into the first round. Subsequently, his competitive spirit drove him to continue to hone his skills. A few weeks after his first fight, he enrolled in a WKA Novice MMA tournament in Hampton, VA. Jesse executed and won all of his fights, eliminating his opponents to take home the championship. Ever the competitor, and grateful for the lessons learned, Jesse found an even deeper appreciation for the infinite details and sought to become a high level striker. Focusing diligently on his striking; spending countless hours with Coach Greg sharpening his craft, driven by his desire to ensure he was well-rounded as a fighter, Jesse emerged with the tools to compete with anyone. Eventually Jesse’s reputation as a fighter made him become feared by his opponents.

After some time away for basic training; Jesse found himself back in Maryland, balancing his career in the Guard and training at the Combat Sports Center. With his growing passion for striking, he decided to begin testing himself in regional Muay Thai tournaments where he racked up an impressive 15-1 record. This allowed him the opportunity to travel and fight in tournaments along the eastern seaboard, eventually leading to him winning an international Muay Thai tournament in Italy.

Jesse eventually began training at other prominent gyms with World-Class coaches including Henry Smith (Rude Boy Muay Thai). Through Henry, he was invited to go to the BMF Ranch in Albaquerque, NM and trained with Donald “Cowboy” Cerrone in preparation for a UFC fight against Miles Jury. The BMF Ranch is a notoriously intense and focuse training environment with intense sparring and world class fighters working to prepare each other for major competitions. His time spent at the ranch confirmed his ability to train and compete with some of the world’s best fighters. Jesse trained and sparred with several MMA stars including Cowboy himself, Paul Felder, Jon Bones Jones, and Pat “Bam Bam” Healy.

After his own personal success and achievements, Jesse realized his calling as a coach. He returned to Baltimore, with a vision of helping others achieve their goals and grow as individuals through Muay Thai. His passion and commitment to help others led him to establishing American Muay Thai in 2015, where he currently works with and inspires dedicated fighters. As of this day, Jesse has trained and coached 6 World Champions, 10 National Champions and 17 East Coast Champion. He is highly regarded as one of Maryland’s top striking coaches. Jesse reputation precedes him. He has become well-respected as a Coach and Leader because of his hard work, dedication and loyalty to his fighters.

American Muay Thai is a style that combines the best elements of boxing, Muay Thai, and Dutch-Style Kickboxing with a focus on clean technique, power, and efficiency. “If you combine boxing technique with the head movement and footwork of Muay Thai, you can be very effective at striking,” says Jesse. The gym focuses on empowering individuals to develop skills from the ground up. The programs offered cater to everyone from Professional Fighters to children. It’s a welcoming and fun environment with major attention to safety, health, technique, and having fun.